Representatives from Marian Assembly 2331 had the honor to present a chalice to Monsignor Jeffrey Laible, the Vicar General and Moderator of the Curia, in honor of SK Bill McCarron, a US Army veteran.  Sir Knights Frank Guest and Richard Kuron escorted Faithful Navigator Don Howell for the presentation, held in the Rev Vincent Capodanno room in the Military Archdiocese headquarters, near Catholic University of America.

Notice is hereby given to the scheduling of the Biennial Meeting of the Virginia District.  The District Assembly meeting will be held on Saturday, March 12, 2022.  The venue for this meeting will be at the Saints Peter and Paul Church, 4309 Thomas Jefferson Pkwy, Palmyra, Virginia 22963.  Doors for Registration will open at 8:30 AM.    We will then convene the Biennial Meeting in the Church Hall at 9:30 AM.

Click the link to read the Minutes of the March 11th meeting.

Omnium Circus & Colors Presentation  --  February 26, 2022
Sir Knights from Acts of the Apostles Assembly 2411 and Bishop J. Louis Flaherty Assembly 1678 had the special honor of presenting the Colors at the Omnium Circus opening show at Capital One Hall, Tysons, Virginia, on February 26, 2022.  Billed as “The most inclusive show on earth,” the Omnium (in Latin means “of all”) founders created the Circus to be an all-inclusive show with everyone in mind. More than 25% of the circus performers, staff and crew have disabilities. Sir Knight Eric Latcheran (Assembly 2411) was featured in a recent The Arlington Catholic Herald article highlighting his involvement with the Circus and presenting the Colors. A link to The Arlington Catholic Herald article-https://www.catholicherald.com/article/local/the-most-inclusive-show-on-earth/“
Assembly 2331-- Wreaths Across America -- December 18, 2021         CLICK for pictures
Marian Assembly #2331 had the honor of participating in the Wreaths Across America tradition at Arlington National Cemetery on December 18, 2021.  Check out the photos provided.  We add a special thanks to two young Boy Scouts from Troop 995 who joined us and their Scout Master Dan for his support in coordination.
Assembly 2204 -- Wreath Laying at Tomb of Unknown Soldier -- December 4, 2021         CLICK for pictures
Potomac Assembly #2204 had the honor of laying a wreath at the Tomb of the Unknown Soldier at Arlington National Cemetery on December 4, 2021. The Faithful Navigator, Faithful Outer Sentinel and the Color Corps Commander, presented the wreath. It was a poignant moment, especially as we saluted the Tomb while in the distance, the bugler sounded Taps.
Torch Lighting for Virginia Special Olympics – November 6-7 – Virginia Beach 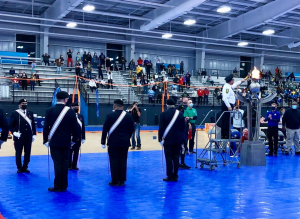 Assembly 2331 Assembles ADA Compliant Picnic Tables -- October 28, 2021         CLICK for pictures
Sir Knights from Marian Assembly 2331 just completed construction and delivery of an ADA compliant picnic table to the Fort Belvoir USO and Warrior Center to serve the needs of Soldiers and Wounded Warriors.  Sir Knights Mark Price, Frank Guest, Pat Franco, Faithful Navigator Don Howell, and Frank Dobrydney worked together for 3 hours over 2 days to complete construction and deliver to the USO.  Tara Bathurst, the Warrior and Family Center Operations Supervisor thanked us and welcomed the new picnic table.  Marian Assembly will continue to work through Tara and with the USO to deliver another picnic table to the USO at Bethesda Naval Hospital in Spring 2022.
Spotsylvania Battlefield Cleanup -- October 21, 2021         CLICK for pictures
The Fathers Cilinski Assembly 3568, in collaboration with the National Park Service (NPS), hosted a Spotsylvania Courthouse Battlefield Clean-Up Event on Thursday, October 21st, at 10:00am.  The intent of the event was to clean all the interpretive signs (approximately 54) within the battlefield due to weathering from the elements. The Assembly promoted Patriotism through the preservation of our nation’s history.  Ten volunteers participated to include Brother Knights and Family Members.  Twenty-Eight volunteer hours were reported to the NPS to include planning efforts and “day-of” execution.  The NPS Staff expressed their gratitude to the Knights of Columbus for coordinating this event and look forward to working together on other projects in the future.  Additionally, attached is a “Before and After” photo of one of the interpretive signs and a picture of my kids lending a hand.
Columbus Day  --  October 11, 2021

The Archdiocese of Washington District will cover the Mass, but anyone else is invited to join in.  I would like to encourage all Sir Knights to plan on attending this event.  Those with Official Regalia Dress are encourage to participate by being part of the color corps.  The celebration on Columbus Day is a Provincial Event, so get all that can to turn out for this. Marshals show at 9:00 AM.   All Color Corps at 9:30 AM. Thanks! Stay safe and well!
Fraternally and Patriotically
Micheal W. Thumm
Colonel, USMC, Retired
Vice Supreme Master, Calvert Province

Thank you to the Marian Assembly color corps for their professional and well executed support to Father Rich Miserendino for this morning’s Mass at St Bernadette Church; and thank you brother Knights who attended Mass with Mary Beth and me.
Vivat Jesus

Memorial Mass -- Fr Vincent Capodanno -- Sep 7, 2021
The Memorial Mass for Father Vincent R. Capodanno, MM, will take place at 6:30 p.m. on Tuesday, 7 September 2021, in the Crypt Church of the Basilica of the National Shrine of the Immaculate Conception, 400 Michigan Avenue, Northeast, Washington, D.C.  His Excellency, the Most Reverend Timothy P. Broglio, J.C.D., Archbishop for the Archdiocese for the Military Services, will be the main celebrant.  This annual Mass is celebrated in memory of Father Capodanno, killed in Vietnam on 4 September 1967, as he aided embattled Marines.  Father Capodanno posthumously received the Medal of Honor, and in May 2006 the Catholic Church officially proclaimed him a Servant of God and thus formally initiated his Cause for Canonization.  The Father Vincent Capodanno Guild is the only official organization established to promote the cause for canonization of Father Capodanno.
For more information, visit www.CapodannoGuild.org.  All are invited to attend the Memorial Mass on the 54th anniversary of his death.  There will be open seating, so please plan to arrive early.  Military members are encouraged to wear uniform of the day, and business attire is appropriate for civilians.
Scroll to top